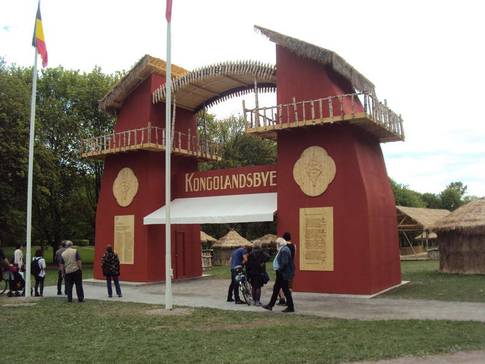 While we were building the Congo Village, some passers-by stopped and asked us: “very nice project, but how are you going to show what you want to achieve with it?” Some guy told us: “really nice”. Then he laughed and winked, pointed to the huts and asked: “are you going to sell something there?” The lady on the TV panel show Nytt på nytt said: “I think the point with the project is that 100 years ago, people said: ‘really cool!’ when they saw the village. Now we have to say RACISM! and then in our minds whisper ‘really cool!’ A neo-Nazi wrote to us that this Village, which apparently is intended to pollute Vigeland’s Park, will be burned! And an “anti-racist” group told us the same. A friend told us: “This is the most important art project in years.” Another said: “you know I love you guys, but this is pointless.”

One year ago, we did an installation entitled Forensics of Attraction (2013) at Bergen Assembly, as a part of the research in this project, in which we tried to highlight a contemporary human zoo that exists in Thailand today. We showed how the so-called Long-Necked Tribes, the Paduang (aka Kayan) women, have, since the 1980s, have been displaced to ethnic villages built for tourists, which generate mas- sive revenue and have become the raison d’être, of some northern Thai states. The reactions we got to the Congo Village, were surprising to say the least.

One day, when we were working on the site, getting ready to build the Village, a lady came up to us and told us that her great-grandfather had held one of the highest positions in the making of the 1914 national exhibition. She had grown up with pictures and proud stories of the family’s involvement in an exhibition that helped define the nation’s position in industrialized Europe. And then she told us that no one in her family had ever mentioned the Congo Village. She first heard about it when we introduced this project. She said this with visible sadness.

A class of school kids came by when we were about halfway through building. The teachers had not planned on talking about this par- ticular exhibition, but the kids, who were all nine years old, obviously wanted to. We watched the teachers struggle to explain what had hap- pened here 100 years ago. The adults didn’t want to say it, they didn’t have the tools to say it, so the explanation turned into a uncomfortable non-explanation, and then they had to leave. This is partly how things disappear from history. This is how misconceptions create dishonesty or denial further down the line.

When we write together, we normally don’t use our own voices. A new joint inflection has emerged in the last four years. But I want to tell a story about Lars, so the coming lines are my voice alone. It’s OK, I guess, since I am going to talk about him.

Once, Lars told me that he wanted to prepare his daughter for the challenges of life. After all, it is still a white male-dominated world. Lars told his daughter not to take shit from boys. He said girls are not inferior boys in any way, “so, dear daughter, never let them put you down.” When he said that, he noticed a change in her face. She then asked him: “but why are you saying that? I never thought that boys were better than me.” At that moment he realised that, in seek- ing to protect her from this potential, he had introduced her to it. In a sense he had created the problem, and then tried to shield her from it. I thought a lot about that story when some of the critics of the Congo Village project created imaginary problems associated with it. And now, here we stand – the Village is built – and none of the imagined

problems has become reality. Yet, they still live on in the minds of those who created them.

The process of building the Congo Village started four years ago, and there is still a long way to go. We are still at the beginning, for the more we learn from our research and the making of this project, the more we realise how little we know. This project took us to different countries, introduced us to different people, libraries, archives, books, sleepless nights, jetlags, joys and anxieties. During the building pro- cess, a strange feeling started to grow inside us: as we were perfecting the details of the buildings, we started to like them the way we like the objects that result from us making art. It is a strange feeling, because we were building what we described in the media as “a monument to mis- representation” and how can any one like that? Sometimes, we hated ourselves for liking the paint job we just finished or for trying to make the structure of a hut stronger. It’s been an emotional rollercoaster.

As much as this project has consumed us on so many levels, it would never have been possible to get to this point without the support of so many people. We want to thank each and every one for their help and the big role they played in the making of this project. Finally, we would like to thank you, who came to see Kongolandsbyen Anno 2014. This wouldn’t be at all possible without you being here.