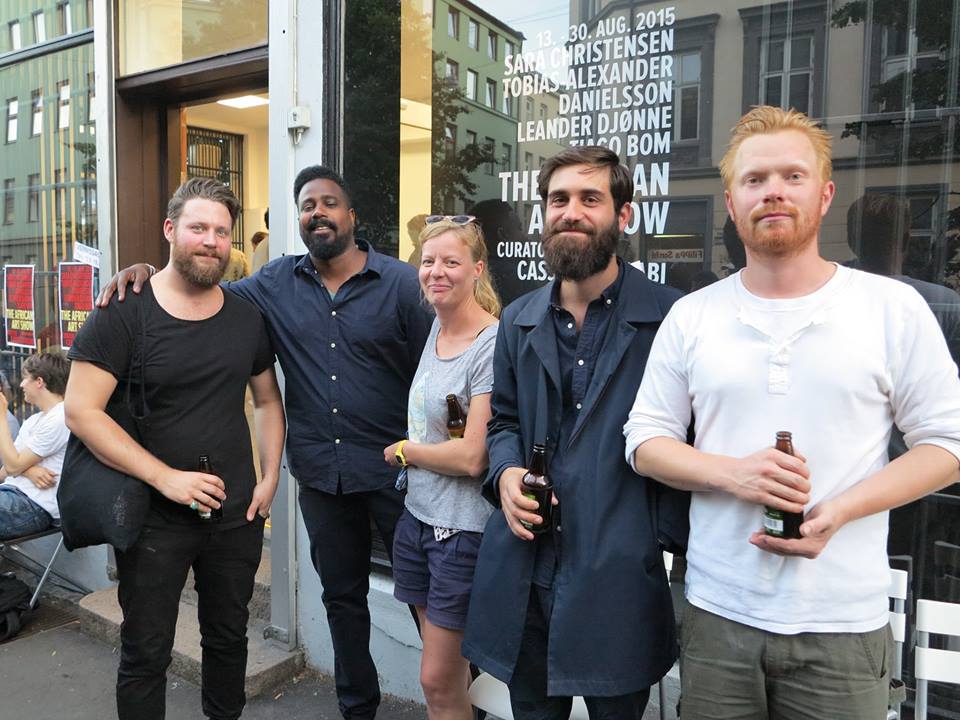 (1)
Few years ago I’ve curated a similar show to deal with the same question, is there African art? Is it really a genre or is it just the art made by Africans? It was no secret that I chose for the last show and this one as well, artists who are not ethnically African. I know a lot of reggae musicians from a none African origins, but I don’t know any none African “African artist”, even when I think about my fellow Africans from European origins, No name comes to my mind!

(2)
In conversation with the Senegalese artist Issa Samb:

Fadlabi: I am not a journalist, so I will ask you about some stuff that I don’t know how to answer myself.
Issa Samb nods.

Fadlabi: Is there African art?
Samb: Yes, there is!

Fadlabi: Is it African art or art made by Africans?
Samb: During my stay in Oslo I noticed some aspects and elements in the Norwegian art scene that one can consider as African. And if we mention music, that is not a question at all.

Fadlabi: Is it just aesthetics then, or is there an ideology to it? I mean, seeing elements is not new, you find the same with Picasso and Modigliani.
Samb: It’s both. It depends on the artist. The elements we see in the work of Norwegian artists should be considered African and Picasso and Modigliani were also creating African art. When Picasso broke away from impressionism and classism and invented cubism, he did that influenced by African sculptures. If it wasn’t for those sculptures, he would have not been able to reach cubism.

Fadlabi: So, you mean there is African art in contemporary art but people don’t call it that?
Samb: Yes. It’s not normal to use African elements and not call what you create African. It doesn’t matter where you come from.

Fadlabi: Do African artists need to come to Europe to make it in the art world?
Samb: An artist doesn’t need to go anywhere. Creating art is being. You can be wherever you are.

(3)
I don’t really know if Issa is right, but a while back I read something that opened my eyes to a whole new way of thinking. I think the one who wrote it was the Egyptian curator Bassam El Baroni. He was talking about how Picasso wasn’t able to see those african sculptures that he was copying. It was something about your position when you look at something. Picasso naturally had a superior one, he didn’t see in those African artists an equal and there for he couldn’t see their work. He was another
European exploring Africa. uncovering the beauty of the savage.

(4)
Fun fact:
The Congress of Black Writers and Artists in paris 1952, had a picasso drawing on their poster for the event.

(5)
I wanted to show my friend’s Sara Christensen, Leander Djønne, Tobias-Alexander Danielsson and Tiago Bom’s works based on their appearance. Following the advice of Issa Samb to look for the African Art everywhere.