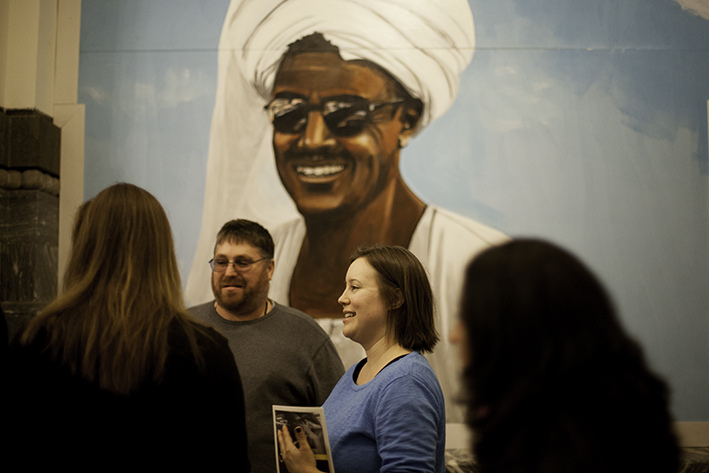 The Museum of Contemporary Art

“All art constantly aspires towards the condition of music”. (Walter Pater)
Since MTV’s breakthrough on television screens in the eighties and nineties, music videos have become public property among large parts of the population. Many people feel that music programmes resulted in the perfect blend of sound and image, and people are increasingly accustomed to and accepting of films without linear narrative action. The potential to experiment is huge. Music is a kind of collective soul: an expression of identity, image, politics and affiliation. Most people associate certain songs with their lives, with special occasions, emotions or encounters. Music often provides a multisensory experience, and many visual artists see the immediate accessibility of music as an ideal that they strive to express in their own work.

“I wish this was a song” focuses primarily on a younger generation of artists and features works from the late 1990s to 2012, but also leaves room for some historical reference works.

Music is the medium that most often resonates in contemporary art. Music has always been of central importance to humankind, and its influence on visual artists and their work is neither new nor surprising. Gustav Klimt praised Schubert, Arnold Schoenberg was inspired by Wassily Kandinsky’s abstract forms when he developed his atonal system, and Morton Feldman worked closely with Mark Rothko. It was only in the 1950s, however, when popular culture gained entrance to the elitist world of art and museums, that the auditory and visual mediums became so closely bound together. Andy Warhol’s famous “banana cover” for the Velvet Underground’s first album is now iconic in the history of music and contemporary art.

“I wish this was a song” is an international group exhibition incorporating both floors of the Museum of Contemporary Art. The exhibition focuses on the role played by music in contemporary art today. Contemporary artists employ music or musical elements in their art. As well as being visual artists, many of them are also musicians, directors of recording companies, music video producers, band members or composers.

The sound you do not hear but see, and the visual you cannot see but hear, is the work (Rob Mazurek)

While parts of the exhibition will get the audience moving, other parts will invite contemplation. The music is often the conceptual backbone of the artwork, making the visual invisible and requiring the audience to use their ears to “see”. On the other hand, some artworks are silent instruments transformed into sculptures or installations, requiring the audience to use their eyes to “listen” to imagined music. Another group of works shows the fascination of artists with rhythm as an element of composition in their art. This is perhaps best illustrated by the fact that several works incorporate a drum or drummer. Last but not least, performance is a frequent form of expression in the approach of artists to music. Some transform sculptures or installations into performative objects, making the audience active participants in their own work.

The works in this exhibition are divided into seven themes: Live!, Performing sculptures, Synesthesia, Get up and dance!, Sing along!, Looking to the classics and The sounds of silence.

The exhibition includes a live programme that runs throughout the period of the exhibition, featuring public performances, concerts and other activities. There is also a communication programme tailored to all ages, with and without workshops. German artist Jan Köchermann is building a sculptural stage in the Banksalen Room. Artists, musicians and dancers will be invited to appear and perform here throughout the period of the exhibition. We are working to organise various events with organisations including Ny Musikk, Ultima and TraP. String players from the Norwegian Academy of Music will play several scores by Dutch artist William Engelen, known as Falten, and Escalier du Chant by German artist Olaf Nicolai will be performed by Stuttgart Neue Vocalsolisten.  The largest collaborative project is the Oslo Complaints Choir, which will perform a new Complaints Symphony featuring complaints from Oslo residents and composed by Swedish composer Georg Wadenius. This concept originated with Finnish artist duo Tellervo Kalleinen & Oliver Kochta-Kalleinen. The première will take place on the launch day, 13 September 2012.